Join StageScreen for another 5-day Summer Intensive in Burton on Trent in August 2019!

Fresh off the back of the successful Greatest Showman Intensive Program join us for MEAN GIRLS! 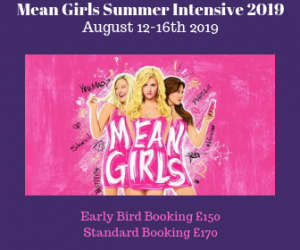 Working with songs and scenes from the brand new Broadway smash hit Mean Girls you will spend 5 days working on voice, acting, dancing and ultimately starring in your own music video of one of the numbers!

There will also be work in progress presentations at the end of the week.

The music video will be released to our YouTube Channel for you to share with family and friends at the end of the week.

Further details on the week are as follows:

Classes will run 10-4 Monday – Friday
Mini performance to family on the Friday afternoon
We will be going to a recording studio one day to record the vocals
We have a tumbling/streetdancing/acro expert coming in : https://www.facebook.com/KaoticMovement/ Macauley Carruthers – who has just won a contract with USN as an athlete at BodyPower
We will be doing a number of the musical numbers over the week including acting, dance routines and singing.
This Summer School in Burton on Trent is run by StageScreen