Drama and Film School in South Derbyshire – extending the 2 week FREE trial to include February too! 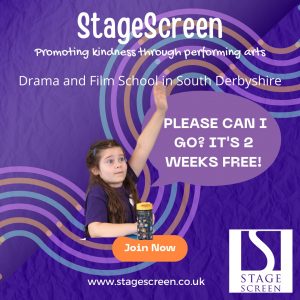 Please get in touch if you would like your child to experience Drama, Musical Theatre, Film and TV classes all whilst promoting a safe and inclusive environment. Kindness is key at StageScreen

Do you know any youngsters aged four to six who love singing and performing?

We are holding a FREE trial Starlets class in the new year for children who might like to join us. 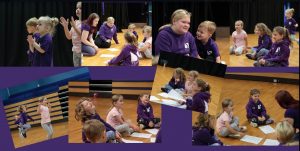 Starlets classes run each Saturday morning in term time from 9am to 9.45am.

The free, trial morning is being held on January 8 from 9am at the William Allitt School, Sunnyside, Newhall, Derbyshire DE11 0TL.

If you know a youngster who would like to attend, you can book your place here. 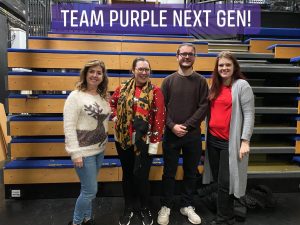 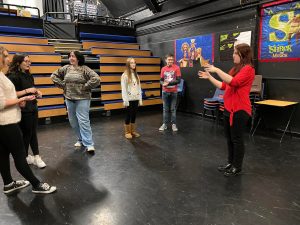 Hannah Kirkpatrick is our new acting teacher and Sam Pearson will be teaching film and TV.

Feedback from our students was great.

It may have been the final session of 2021, and the morning after our second performance of The Godmother, but energy levels were high. 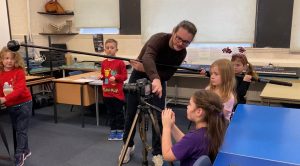 The next generation of Team Purple is ready and raring to go when the new term starts. If you would like to join us, apply for a free trial session here. 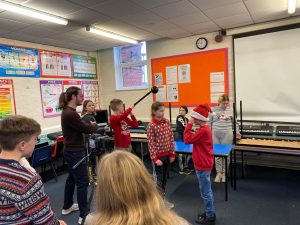 Our students (and teachers) had a wonderful time bringing the story of Lily Thomas home to Burton. It seems that our audiences loved it too.

Here are just a few of the comments from our audiences: 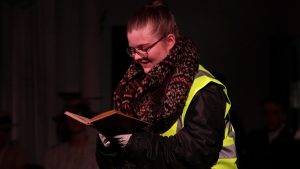 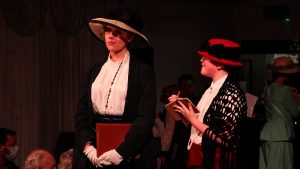 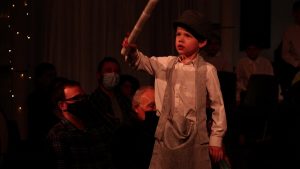 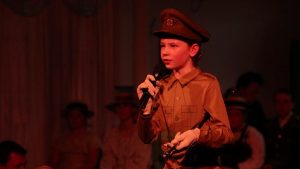 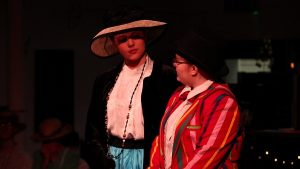 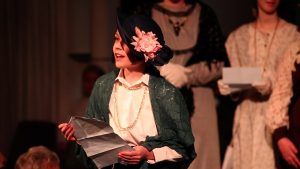 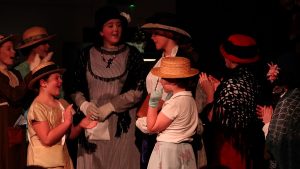 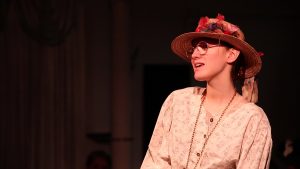 Show week is here! Our students perform a new play, The Godmother, at The Trinity in Burton upon Trent on Thursday and Friday (December 9 and 10).

Yesterday was our dress rehearsal. Our young cast did a great job of managing props, costumes and staging in the iconic venue. 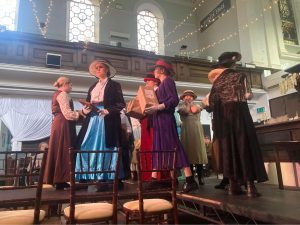 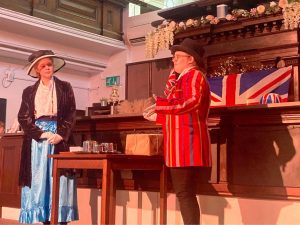 TThe Godmother tells the true story of Lily Thomas, a widow from Rosliston Road in Stapenhill. She decided to organise food parcels every two weeks for Burton men who were captured in World War 1 and held in German prison camps.

StageScreen Principal, and producer of The Godmother, Heather Gallagher, explained: “The Trinity was George Street Methodist Church in Lily’s day. It played a key role in her story. Chruch trustees donated cash to Lily’s fund. They also allowed Lily free use of the Sunday School rooms to hold fundraising concerts.

“This Wednesday (December 8) is the 103rd anniversary of a thanksgiving service held in the George Street church to mark the end of the war. Lily attended. Some of the soldiers who had been released from prison camps were also there. It’s strange to think that our Lily will be literally stepping in the footsteps of the real Lily just over a century later.”

There is a strong flavour of the music hall tradition in The Godmother. Songs from the period are included. Audience members are welcome to join in. A free four-page programme will be given to everyone. It will include choruses of the songs as well as more historical information about Lily.

Lily was a hero

In the run-up to show week, playwright Elaine Pritchard received a message of support from descendants of one of the soldiers Lily supported: “The work of Lily, so difficult considering the difficulties of distance, communication and bureaucracy, needs more recognition. From my family’s perspective, she was a hero; someone who took the initiative and showed great skill in addressing a problem.”

Tickets can still be booked online at Eventbrite. Go to thegodmotherlilythomas.eventbrite.co.uk 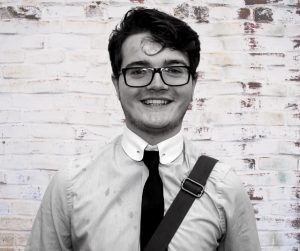 Sam is a local filmmaker with a BA Hons in Cinema and Photography and a passion for visual storytelling.

He has worked across the country filming live televised events, action films, commercial projects and his own personal projects.

Sam said: “It’s extremely rewarding to work with young people and help them to express themselves creatively. I’m really looking forward to guiding the students through the process of transforming a creative vision into a finished project.”

The eagle-eyed among you may recognise Sam from some work he did back with us towards our first Film Festival in 2017. We are thrilled to be welcoming Sam into our permanent team from January 2022.

Jack Broughton, who has been our comedy and drama teacher since September 2018, is leaving us for pastures new.

We’ll miss him so much and we thank him for all the fun and creativity he brought to lessons, rehearsals and productions. Among many highlights, he wrote a serial drama called Castleford Close about life in lockdown. Our students performed it last year and it was uploaded to our YouTube channel. His final project for us is directing our December 2021 production The Godmother.

All the students and teachers wish him every success in the next exciting stage of his career. 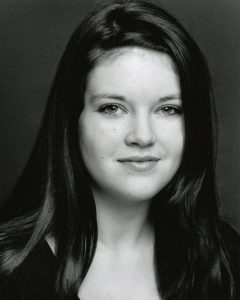 But, as we say adieu to Jack we are excited to welcome Hannah Kirkpatrick back to the team.  Hannah taught our Starlets class when it first launched. She handed over the reins to Meg when she left to have her third child. Now, she’s back and taking over our Saturday morning comedy and drama classes for six to 18-year-olds from January 2022.

Hannah says “I love bringing a sense of fun, inspiration and discovery to class.  There are no wrong answers when it comes to my classes!  Just a chance to learn new skills, explore your creativity and build confidence in a safe and supportive environment.  I can’t wait to get started and explore exciting new projects with the brilliant students at StageScreen.”

Hannah studied Drama at The University of Hull, before training for a Postgraduate Diploma in Acting at The Bridge Theatre Training Company.  She has worked as an actor on stage and screen as well as teaching for performing arts schools across the Midlands.

The cast for our December play, The Godmother, has now been chosen.

We kicked off the new term with two weeks of workshop-style auditions. All our students impressed us with their enthusiasm, commitment and hard work.

This new play has been written by Burton’s Elaine Pritchard. It tells the true story of Lily Thomas. She sent more than 29,000 food, clothing and medicine parcels to Burton men held prisoner in Germany during World War One.

Principal Heather Gallagher explained: “It’s a real ensemble show and there will be lots for the cast to do. They are excited to be the first people to play these roles on stage.”

The play will be performed over two nights at The Trinity, on George Street in Burton town centre. Tickets will go on sale later this autumn for performance on December 9 and 10.

Heather added: “In Lily’s day, The Trinity was George Street methodist church. We know that on December 8, 1918, Lily attended the church for a service of thanksgiving. She was joined by some of the soldiers she had helped who had been released from prison camps. It feels as if Lily is really coming home.”

The cast for the Godmother

We would like to say a huge thank you to Keepmoat for their kind donation of £250 back in July to enable us to rent our Sister Act Costumes!

Advertisement
Take a look at the selection of new 2-4 bedroom homes available at Malthouse Place in Burton-on-Trent – ideal for first-time buyers and growing families.
They have a scheme to help you move; Help to Buy or Easymove*.
Contact them to start your journey and to find out more.
*T&Cs apply, selected plots only. 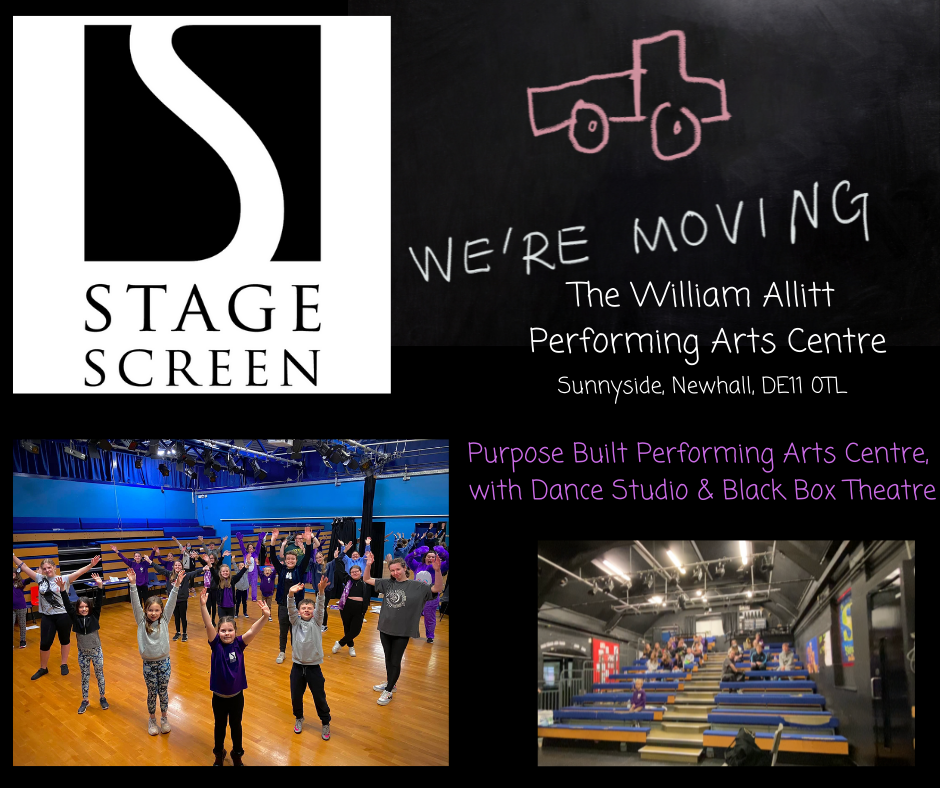