The third lockdown holds no fears for us.  Our students are continuing to benefit from virtual lessons that are full of fun and creativity. 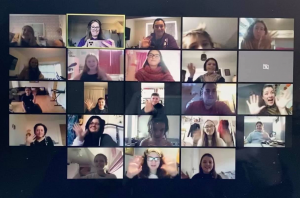 Founder and principal, Heather Gallagher, said: “Last March, when the first lockdown came, we switched immediately to using Zoom to bring our students together for lessons. We’ve not missed a beat since.

“In a world that can feel very scary and unpredictable, I think it’s important that we give our youngsters some certainty.”

An antidote to stress and anxiety

Heather continued: “Whatever else is going on, they know they will see their friends and their teachers on screen every week. Creativity is a real antidote to stress and anxiety. It’s a great way to forget about everything else for a few hours. Our students can relax and focus on something they love.

“We have viewed each lockdown as a chance to shine a spotlight on what we CAN do. This has led to a host of exciting new opportunities.”

The stars who have taught Burton youngsters new skills and boosted their confidence in this way have included Christina Modestou, who originated the role of Anne Boleyn in the musical Six. Also sharing their knowledge were: Chris Tendai (Hamilton); Luke Bayer (Everybody’s Talking About Jamie); Danny Mahoney (Best Exotic Marigold Hotel and Florence Foster Jenkins) and Barnaby Thompson (The Lion King).

Other highlights of 2020 include the youngsters filming their own, original drama serial, Castleford Close and uploading it to the StageScreen YouTube channel. They also did one of the first UK performances of The Show Must Go Online – a musical specially written for lockdown.

StageScreen is currently offering a free, two-week trial for any new students to experience classes on Zoom classes. Youngsters aged four to 18 get age-appropriate lessons in acting, singing and film work from teachers with professional industry experience. Classes run every Saturday morning in term time.

Heather has also devised and organised a series of online performing arts competitions. These are open to all youngsters, not just StageScreen students. The first one received more than 400 video entries, including some from overseas.

Recently, StageScreen hit its target on a Crowdfunder campaign to raise money so that its child-friendly version of the hit musical Sister Act could be filmed without an audience and streamed online. The licence for the show was bought when Heather assumed it could be performed in front of a real audience at Burton’s Brewhouse Arts Centre. When the COVID-19 crisis made this impossible, StageScreen needed to raise more money for extra costs to film it and stream it online. The show can now go on as a filmed musical.

Heather said: “We are so grateful for the support we have received on Crowdfunder. We will continue to follow Government rules and guidance. So, if it’s not possible for us to come together in March to film Sister Act Jr, we will put the date back until it is safe to do so. But, meanwhile, we’ll keep creating new opportunities and providing a creative outlet for our students.”

The show must go on – and it does at StageScreen. For instance, we’ve been able to bring in West End performers to teach our students in Zoom workshops during lockdown.

Our classes moved online when the national lockdown began in March. Our students have continued to work hard and, just as importantly, support each other.

Having fun and forging friendships in a safe, caring environment is just as important to us as the training we provide in musical theatre, acting and film work.

Helped by our patron, theatre director Tom O’Brien, we have held a series of Zoom workshops with professional performers from West End shows. You can watch a video below showing the highlights of some of these events and a look forward to our next production – the online children’s musical The Show Must Go Online, which is coming up in September.